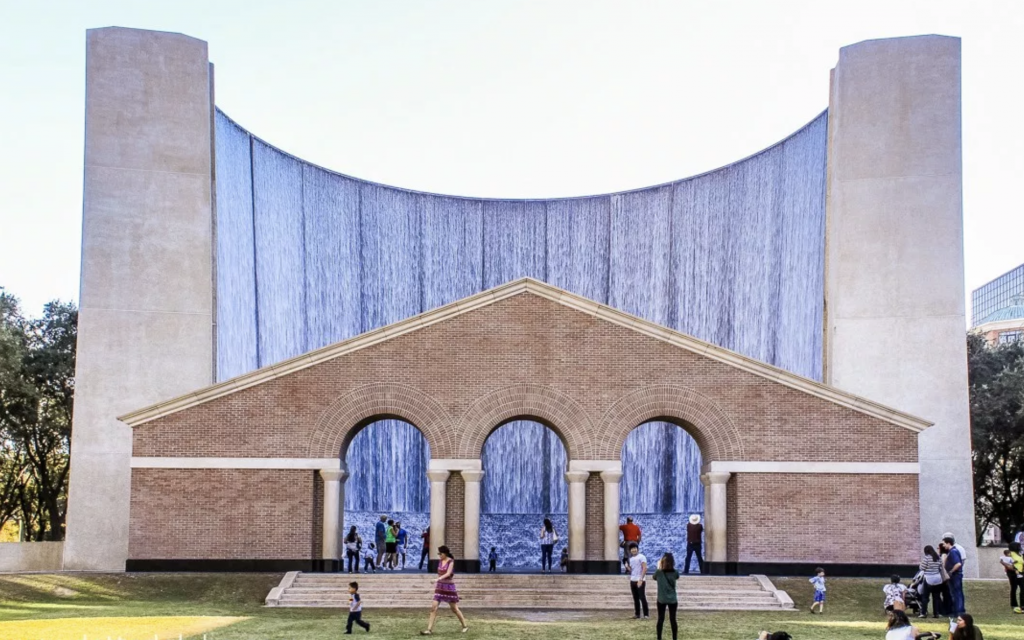 The Gerald D. Hines Waterwall Park is a city park located in the middle of Uptown Houston; the park is publicly owned by the city of Houston. It is open daily from 8:00 a.m. until 9:00 p.m. The park is 2.77 acres and contains a large, man-made waterwall for which the park was named.

The Gerald D. Hines Waterwall Park was created in 1983. However, at its origination, it was a privately owned park. However, in 2008 the Uptown Houston Tax Increment Reinvestment Zone (a local non-profit government corporation) purchased the waterfall, along with the nearly 3-acre park surrounding it. With this purchase, the city established the Gerald D. Hines Waterwall Park as a city park.

The primary attraction of the Gerald D. Hines Waterwall Park is the large, sculptural fountain housed within the park. The waterwall is a 64-foot architectural fountain in the shape of a semi-circle. It re-circulates an impressive 11,000 gallons of water per minute. The rest of the park is filled with oak trees and functions as a slice of nature and calm in the center of Uptown Houston.

The park is a public use space, but it is not intended for all purposes. The Park hosts a long list of prohibited activities. Outdoor cooking or fires, camping, skateboarding, rollerblading, biking, flying kites, and any sports like football, soccer, or Frisbee are all included on the list of prohibited activities. Pets are allowed in the park but must be kept on a lease.

The Gerald D. Hines Waterwall Park is primarily a relaxing space to be outdoors. While the park restricts many activities, a permit can be obtained to use the park for group functions of more than 20 people.  The park is a regular spot for picnics, and live concerts can occur in the park.

Up Next: McGovern Centennial Gardens